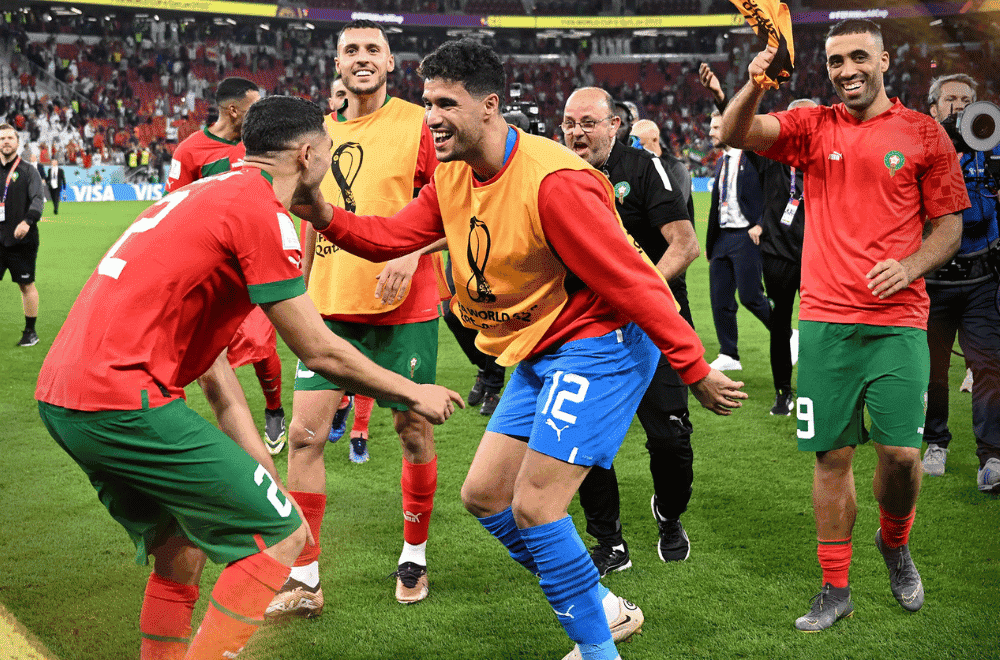 On Saturday, Morocco beat Portugal 1-0 to become the first African nation to enter the World Cup semi-finals. But who are these guys—and how have they managed to beat some of the best teams in the world?

First, the historic moment in Qatar

Morocco won a gritty game on Saturday—holding steadfast to a one-goal lead scored just before halftime. All of Portugal’s firepower—including the great Cristiano Ronaldo—could not wrest that slender advantage from them. The giant-killers added Portugal to their impressive list of vanquished foes—which includes Belgium and Spain. They will face their former colonisers—France—in the semi-final.

Point to note: Morocco has had two World Cup wins across five tournaments in its entire history before this year. Six months ago, it lost 3-0 to the United States.

A historic moment: Morocco is not just the first African country to make it to the semi-finals—it is also the first Arab team to get this far. In fact, the World Cup trophy has long been the privileged preserve of just two regions of the world:

Only eight nations have won the men’s World Cup in its history. Just five other national teams have even been runners-up, across 21 tournaments. So densely concentrated are the championships in South America and Western Europe that every single World Cup-winning nation borders another winner, so long as you give England a Risk-style dotted line over to France.

Every Moroccan win gives hope to the rest of us who don’t belong to that exclusive club.

FYI: The West is so clueless about Africa that the German company Adidas designed World Cup jerseys for the Algerian team with a traditional Moroccan motif—and then refused to withdraw them, making both countries unhappy. Why this was especially egregious: Morocco and Algeria severed all diplomatic ties back in 2021.

An Arab cause: Morocco’s success has become a fitting fairytale for the first World Cup to be hosted in the Arab world. In the stands, cheering fans are just as likely to carry Saudi Arabian, Iraqi, Egyptian, Palestinian, Qatari and Jordanian flags. But the most prominent is the Palestinian flag—which the team displays with pride after each win—a defiance of FIFA rules against political gestures that has gone unpunished. 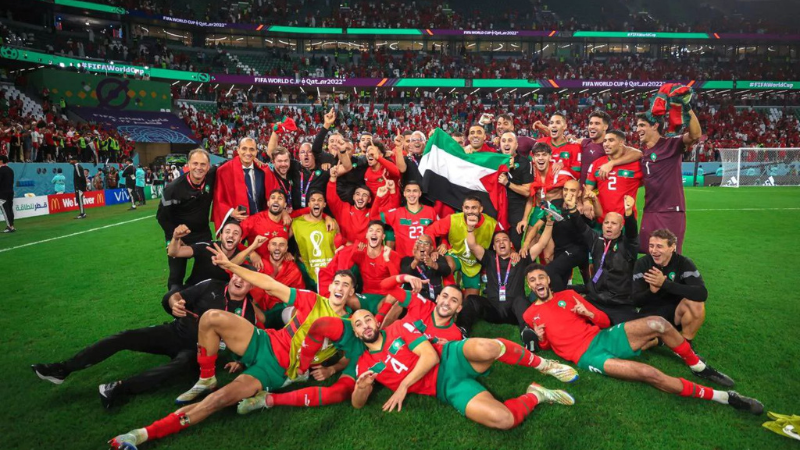 And it’s not just the team: “Palestinian flags, Palestinian armbands and even black and white headdresses, or kaffiyehs, featuring the Palestinian flag have all been on display throughout the month-long tournament.” Punishing these displays would invite attention to other uncomfortable truths:

To see Palestinians cheering for Morocco and Moroccans cheering for Palestine is one of the most significant Arab popular rejections of normalisation with Israel. This moment will live in the minds of several generations of Arabs forever.

Also making history: Coach Walid Regragui who is the first Arab coach to get his team this far in the World Cup—having only coached clubs at home in Morocco and Qatar. His achievement is all the more impressive given the fact that he was appointed only three months ago. Asked why there aren’t more Arab coaches in the big leagues, he said:

Maybe it’s a cultural question, maybe it’s a mentality. Today, I think it’s impossible that Manchester City or Barcelona will hire an Arab coach, they don’t even think about it, as if we’re not worthy, or ignorant or incapable of such a task. However, there’s moments in history that make people change their mind, but it’s on us as African and Arab people to change history. At a certain point, this could happen.

Making Muslims visible: Each time Morocco wins a match, the team prostrates itself in front of fans—performing the Sajdah Al Shukr, the prayer of thankfulness to Allah. For Muslims fans, the team’s unabashed faith offers a rare moment of validation:

I can’t describe the emotions I feel when I see players on the biggest stage of their career seeking help, attributing their success and thanking God on a global stage, showing they are human — just like myself and every other Muslim.

See one such instance below: 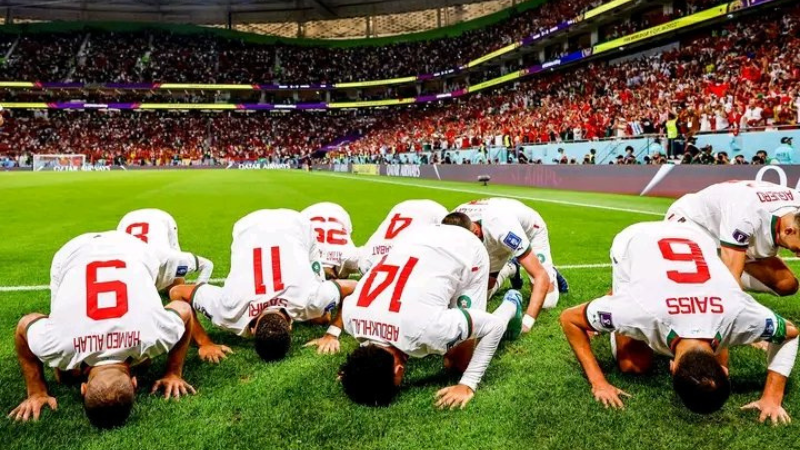 Making mothers visible: The media spotlight on footballers’ families often focuses on their wives or, at best, children. But the Moroccan players have put their moms front and centre. When Achraf Hakimi went into the stands to kiss his mother, the moment went viral—and birthed a new Moroccan slogan: “You are our favourite son.”

Many of the players have risen out of poverty—and the sacrifices of their parents. And like Hakimi, all are keenly aware of their debt: “My mother cleaned houses and my father was a street vendor. We come from a modest family that struggled to earn a living. Today, I fight every day for them.” The Moroccan government is paying for all their expenses—thanks to the efforts of coach Walid Regragui—whose mom is attending her first tournament with her son.

The win over Portugal ended on this lovely and now-familiar note—with winger Sofiane Boufal dancing with his mother on the field:

The Moroccan spirit: is best captured in this moment when Jawad El Yamiq wandered over to kiss his rival Pepe's head—soon after the Portuguese player missed a critical opportunity to score a goal:

As a singular moment it's... pure, so unscripted. In context, it's the story of this World Cup, the story of Morocco's run. It is relief and elation and just that touch of comical shithousery… It's the acknowledgement that for a second there, Morocco's fate wasn't in their hands. Ronaldo missing the ball, Pepe missing the target... this was one of those moments where El Yamiq knew that sometimes you just need some plain, old-fashioned luck to be on your side. And he just wanted to show his gratitude.

See the moment below: 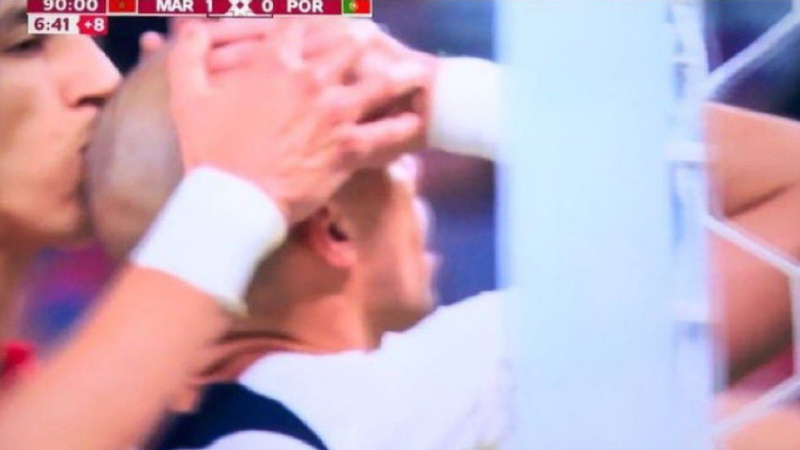 The fan spirit: The noise in the stadium during the match against Spain reportedly reached 150 decibels—equivalent to a jet taking off—when Hakimi scored the clinching penalty. The fans are now famous for their ‘Viking clap’—which was started by Icelandic supporters and is now just as common at club matches in Kerala, France and Iran.

The secret power of the diaspora

One in five players in the World Cup are from immigrant families. Of Morocco’s 26-member team, just 12 were born in Morocco—the lowest ratio among all the teams. Most of them are of Moroccan heritage but born in Spain, Canada, France, the Netherlands and Belgium. Their inclusion is testimony to Regragui’s push to open the team to the diaspora. When Morocco beat Spain, he said:

Today, I think it showed to the world, every Moroccan is Moroccan with his passport. When he comes to the national team, you want to die, you want to fight. And that is what I want to show. And now, we have one example… You have some players ... born in Italy, some players from Spain, players from France, Netherlands and Belgium. Every country has a football culture, and you make a milkshake with that.

Regragui himself was born in Paris to Moroccan parents.

Choosing the homeland: The success of that formula is also a sharp rebuke to European football coaches—who have often been mystified by the decision of immigrant players to play for their homeland. In 2016, the Holland assistant manager said this of Hakim Ziyech’s decision to pick Morocco:

These are stupid choices; they are stupid boys who should have had a little patience… How can you be stupid enough to opt for Morocco when you are eligible for the Dutch team?

Dutch reporters have often implied that Moroccan-descent players were “paid” to make that choice.

Data point to note: The Moroccan squad is made up of players from 12 different leagues and seven different birth nations. And more remarkably this: “[E]very single Moroccan victory at the tournament has come with a member of their starting 11 having been born in the opposition nation.”

The bottomline: The Indian football establishment may want to pay closer attention to Morocco’s dream team.